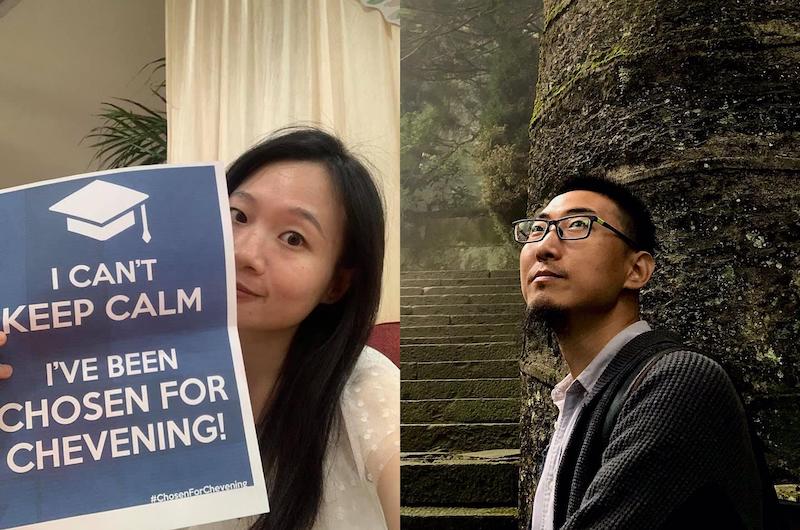 This is an overview of the “0919 Huang&Wang” case (aka the Xuebing Case, an abbreviation of Huang Xueqin and Wang Jianbing’s first names). It will provide a comprehensive account of the secret arrest of “Xuebing”, as well as the ongoing progress of the case. We hope that friends from civil society community, media, and international community could continue to stay tuned, and support Huang and Wang. We urge the Guangzhou police to release them unconditionally. This document will be continuously updated (by 2021.11.19).

Feminist journalist Huang Xueqin and occupational disease advocate Wang Jianbing (nicknamed “pancake”, pronounced as “Jianbing” in Mandarin Chinese) were secretly taken away, last seen at Wang Jianbing’s apartment, since the afternoon of September 19, 2021. It was later confirmed that the two were arrested by the Guangzhou Public Security Bureau at around 3 pm that day on suspicion of “inciting subversion of state power”. It is also suspected that the two were placed under “Residential Surveillance at a Designated Residences” (RSDL), but the police did not send any formal notice to their families as legally required until the end of October. Huang Xueqin was planning to travel to Hong Kong International Airport via Shenzhen on September 20, 2021 to study in the United Kingdom, and Wang Jianbing had planned to accompany Huang part of the way.

On September 19, 2021, Wang Jianbing’s residence (#147-149, Xingang West Road, Haizhu District, Guangzhou, China) was also raided by the police, and both of their belongings were seized. Moreover, the front door lock was changed, and the front door security camera was removed as well. By the time this overview is written, the police still refused to allow their families to enter the apartment to pack their belongings. At the end of September, Xueqin’s journals, which were left at her apartment, was also confiscated by the police, and Wang Jianbing’s Facebook account was also found to be logged in by the police.

It has been confirmed, according to multiple sources, that the main reason for the arrest of the two has to do with the casual social gatherings at Wang Jianbing’s apartment. The police has acquired photos and a list of nearly 40 people who had participated in the gatherings from footages collected by surveillance cameras that were installed at the front door of Jianbing’s apartment building. After the arrest of Huang&Wang, police also continuously harassed and summoned participants of the gatherings for interrogation, asking them to identify contents that they deemed as politically sensitive, and forcing participants to sign false confessions that were drafted and fabricated by the police themselves.

According to friends who had been to Wang Jianbing’s gatherings, Jianbing had long invited his friends to his apartment for tea and chat, since he is a huge tea lover. At the gatherings, participants mostly focused on sharing their daily lives, offering support to friends from their communities, especially to those who had been suffering from depression, exchanging views and ideas on charitable causes and arts and etc. In other words, there wasn’t any conversations about politically sensitive topics at the gatherings. In a nutshell, characterizing the gathering as an act of “inciting subversion of state power” is a deliberately malicious attempt of the Guangzhou police to frame the two as such.

Wang Jianbing (born in 1983 in Tianshui, Gansu Province; independent labor activist): He has been engaged in non-profit work for over 16 years. After graduating from university in 2005, he joined the Western Sunshine Rural Development Foundation in Beijing to engage in rural development work, acting as the Project Manager of the Rural Education Program for five years. This kicked off his career as a non-profit worker with a deep commitment to youth education and development. In 2014, he joined the GongMing Institute of Social Organization and Development as the Project Manager and Coordinator of their Youth Development Project as well as their Disabled Community Empowerment Project. Since 2018, he has taken on advocacy and service work for workers with occupational diseases such as pneumoconiosis, providing necessary legal support. Wang was also a key supporter of the #MeToo movement in China.

Huang Xueqin (born in 1988 in Shaoguan Prefecture, Guangdong Province; independent journalist): She has worked as an investigative reporter for News Express (xinkuai bao) and Southern Weekly. She focused on issues such as gender, affirmative action, official corruption, pollution from businesses, and marginalized groups. She also participated in many #MeToo campaigns to provide support and assistance to victims of sexual assault and harassment. Huang Xueqin planned to study for a master’s degree in law at the University of Hong Kong in 2019, but was criminally detained by Guangzhou police on October 17, 2019 for “picking quarrels and provoking trouble.” After spending time in enforced disapparance (“residential surveillance in a designated location”), Huang was later released on bail on January 17, 2020. She had received a Chevening Scholarship earlier this year, a full scholarship to study for a master’s degree in Gender and Development at the University of Sussex. She was planning to leave for the UK on September 20.

抓人之后，警察还在做什么？ What Are Police Doing?

Since Huang Xueqin and Wang Jianbing were arrested on September 19, 2021, Guangzhou police linked up with many public security departments across the country, summoning and interrogating over 40 people in Guangdong local and inter-provincial areas. Friends were forcibly asked to give statements and to unlock their electronic devices for the police. Police also searched their homes and copied files on their electronic devices. Those who were harassed include: individuals whom the police had identified as participants of the social gatherings using footages collected by the surveillance cameras that were installed at Jianbing’s apartment building, and mutual friends of Wang and Huang. The police interrogated and intimated them for up to 24 hours without any legal formalities. They were asked by the police to identify the specifics of the gatherings at Wang’s apartment, match names of the participants with photos taken by the surveillance cameras, and other social activities and personal networks of Huang and Wang. The police asked the friends to be silent about the case in public and not to reveal any details of the intergoration.

What is worse is that the police’s core strategy in handling the case is by forcing Huang and Wang’s friends to sign false statements fabricated by the police, otherwise threatened them with continual harassment from police and pressure on their families. Some friends were forced to sign these “statements” and to falsely accuse Huang and Wang of participating in training activities that subvert state power. The police also fabricated that the gatherings at Wang Jianbing’s home were political gatherings to criticize the government. We have reason to believe that Huang and Wang have continued to deny these allegations in prison, which is why the police had no choice but to change their strategies, which is to instead harass Huang and Wang’s friends and force them to sign false statements. These false statments are believed to be key evidences in a future trial. Until now, the Guangzhou police continue to harass and summon friends as means to obtain illegal evidence to use against Huang and Wang.

家属和律师遭遇了什么？What Happened to the Family and Lawyer?

On September 20, the second day after Wang and Huang were abducted by the police, Guangzhou police together with Gansu police went to Wang Jianbing’s hometown, threatening the family not to seek help about the case. Between September 28 - 30, Wang Jianbing’s family went to Guangzhou to look for him. They went to every level of the Guangzhou Security Bureau as well as to the Guangzhou Procuratorate to petition and lodge formal complaints, yet they did not receive any response. On September 30, Wang’s family member was questioned by Guangzhou police for over half an hour, and was told that Wang Jianbing was arrested by Guangzhou Public Security Bureau. But police refused to provide the family with any formal notice, instead asked the family to be silent about the case. In late October, Wang’s family went to Guangzhou again with Wang’s lawyer. They were again denied access to Wang’s apartment. The police also questioned the family again, and asked them not to disseminate any information regarding the case to others.

Regarding Wang Jianbing’s attorney: In the mid-October, Wang’s family appointed Guizhou attorney Xiao Yunyang to defend Wang Jianbing. On October 21, Attorney Xiao met with officer Wang from the Guangzhou Public Security Bureau, and submitted to the case-handling authority a application to meet with Wang Jianbing and the power of attorney. In the weeks that followed, Guangzhou police used the excuse that they “required more time to verify the authenticity of the documents” and refused to recognize the lawyer as Wang’s legal representative. His application for a lawyer visit was also denied by the police, who cited the same excuse. They requested the lawyer to return and wait for a notice. The police have also hinted that “the case involves national security, so there’ll be difficulty in meeting with Wang”. Afterwards, Attorney Xiao contacted Guangzhou police several times to apply for a meeting with Wang. On November 19, the case-handling authority notified Attorney Xiao that his request to meet with Wang was not approved, nor was his application requesting Wang to be released on bail.

Latest updates of the case: On January 25, 2022, informed sources confirmed that Huang Xueqin is now being held at the Guangzhou Second Detention Center (Tangang Village, Shijing Town, Baiyun District) on charges of “inciting subversion of state power”. Previously, on November 5, 2021, Wang Jianbing’s family also received an “arrest notice” from the Guangzhou Public Security Bureau, indicating that Wang Jianbing was detained at the Guangzhou No. 1 Detention Center for “inciting subversion of state power.

After being informed of the arrest in November, relatives and friends tried to deposit money for the two through the online prison remittance system of Guangzhou No. 1 Detention Center. When Huang and Wang’s names and ID numbers were entered, the system showed “verification failed” and the attempt to deposit also subsequently failed. Normally relatives and friends of detainees in Guangdong would be able to deposit money through this system. Failure to do so implies that the two’s detention location might be different from what’s indicated by the notice. The real location of the detention remains unknowable, as well as other basic informations, such as their health conditions.

The followings are the main timeline of 0919 “Xuebing” case. It will continued to be updated. Readers could also look up the past case briefings to find out more details.

Amnesty International’s China Campaigner Gwen Lee said: “The Chinese government’s disdain for human rights has once again been laid bare by these unjustifiable charges for two activists whose only so-called crime has been to peacefully advocate for the welfare of others. Neither Huang Xueqin or Wang Jianbing have committed any internationally recognized crime. They must be released immediately.”

“Huang Xueqin is a prominent journalist who was only serving the Chinese public interest by investigating social issues, and it is outrageous to suspect her of subversion”, insists Reporters Without Borders (RSF) East-Asia bureau head, Cédric Alviani, who calls for Huang’s “immediate release alongside all other journalists and press freedom defenders detained in China.”

“The IFJ said, “Huang’s disappearance is concerning as detainment has been increasingly used by the Chinese government to suppress political dissent. The IFJ stands in solidarity with Huang, who has faced continual harassment by Chinese authorities for drawing attention to important issues in the public interest.””

“A journalist and an activist have gone missing for two days from the southern provincial capital of Guangzhou. Colleagues and friends fear that local police have taken them into custody. CHRD urges Chinese authorities to investigate their whereabouts and, if they are in official custody, to release them immediately and unconditionally.”

“The Coalition For Women In Journalism is troubled by Sophia’s disappearance. We demand Chinese authorities immediately share her whereabouts or launch an investigation into the matter. We remain worried that the authorities have intercepted Sophia and are holding her captive. The CFWIJ believes that Chinese authorities must adequately address and inform the public about Sophia’s situation. We stand in solidarity with the journalist and hope for her safe return.”